To activate the GPS, touch the button with the target symbol.

Once a location has been received by the hardware, a blue spot will be shown and the map will be locked on your location. If this is on a currently-installed topo map, it will be shown; otherwise the position will be shown on the index map. 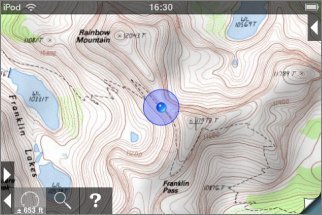 The accuracy of the fix is shown by a blue circle around the location spot, and in figures within the GPS button itself.

As new location fixes are received the position of the spot and the accuracy information will be updated. While the map is locked to your location you can zoom in and out as normal; dragging the map is possible but it will spring back to your current position when you release it.

Touching the GPS button again will stop updating the position and unlock the map, but the spot will remain visible. Touching a third time will remove the spot.

GPS and other sources of location

Typically, on an iPhone when you press the GPS button it will first show a position based on cellular base station information. This will be accurate enough to select the right map, but could easily be many hundreds of meters out. Then after a few seconds a GPS fix will be received and the display will be updated with its much more accurate position. If you're outside of cellular coverage, the app can take much longer to get a GPS fix because it doesn't have the initial clue from the cell tower; you may need to wait for several minutes, but you will eventually get a fix if you have a clear view of the sky.

All devices have a mode that switches off all radios for aircraft regulation compliance. Note that this turns off the GPS receiver as well as the cellular and WiFi radios. So don't be tempted to enable airplane mode when you know you have no cellular reception in the hope of improving battery life. If you want to save power, you can turn off the 3G radio in Settings - General - Network; this should not affect the GPS. You might also consider removing the SIM card.

A compass is present in the iPhone 3GS and newer, and iPad. On other devices the compass button is not shown.

To enable the compass, touch the compass button. The map is rotated to align with the ground. 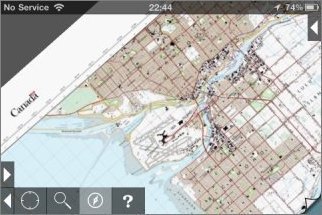