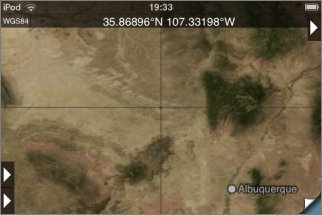 If you touch the co-ordinate display for about half a second without moving your finger, a set of buttons will appear that allow you to set the format: 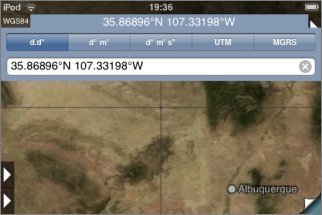 The supported formats are:

UTM and MGRS are related grid reference formats. The USNG format is essentially the same as MGRS. For more information, see their Wikipedia pages: UTM, MGRS and USNG.

The current map datum is shown to the left of the co-ordinates. Two are available, NAD27 and WGS84. NAD83 is essentially the same as WGS84. To change datum, touch this display for about half a second without moving your finger: 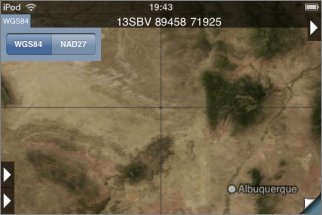 After touching the co-ordinate display, a box is displayed below the format buttons into which you can type co-ordinates to go to: 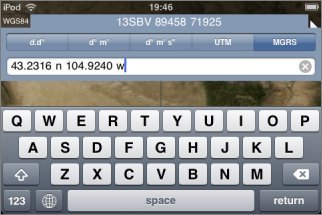 The format that you enter need not be the same as the currently-displayed format; the app will try to understand what you type and show that location.

It's also possible to copy from and paste to this box, to share co-ordinates with other apps, emails, web pages etc.

Co-Ordinates on the Topo Screen

On the topo screen, additional features are shown when you enable the co-ordinate display:

At the left hand side of the screen, a distance scale is shown: 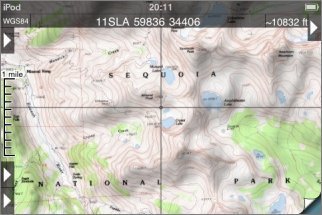 (This isn't shown on the index map because its scale is not uniform.) You can change its units to either miles, feet or meters by touching it (at its left side) for about half a second; it will cycle through the different formats.

To the right of the co-ordinates display, an estimate of the altitude at the crosshairs is shown. This estimate is based on the data that is used to compute the hill shading effect and its resolution is limited. It will generally give reasonable values in flatter terrain but could be substantially wrong in more vertical terrain.

The units can be changed between feet and meters by touching the display for about half a second:

If you need accurate co-ordinates, checking the accuracy at the corners of the map is recommended: 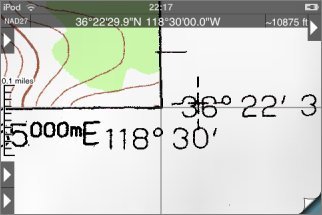 Most maps show NAD27 co-ordinates (you can check this in the text that's normally at the bottom-left of the map). If you want to use WGS84 co-ordinates, there is normally a cross a short distance from the corner; check there instead: 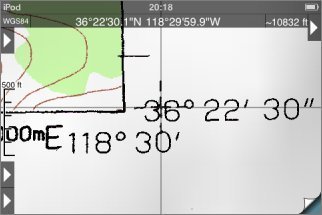 Please report any maps you find that don't align properly.

When you mosaic maps together the accuracy of the co-ordinate display may decrease. In this case it's particularly important to check the corners of the maps.