CSV format is intended for users who wish to transfer waypoints between Topo Maps and their own spreadsheets, databases and other programs. For example, here is a spreadsheet containing some of the highest peaks in Alaska:

All spreadsheet programs should be able to save in CSV format; the resulting file will look like this if viewed using a text editor:

Topo Maps expects the first row of the file to contain column names. It will ignore any columns whose names it does not recognize. The recognized names are:

NAME
The name of the waypoint. This column must be present.
LAT or LATITUDE
Latitude, which can be either in decimal degrees, degrees and decimal minutes, or degrees minutes and seconds.
LNG or LONGITUDE
Longitude; same formats as latitude. Note that western-hemisphere longitudes must be negative. You can also put a compass-point letter after the value.
UTM
UTM co-ordinates may be given instead of latitude and longitude. You should not specify both.
MGRS
MGRS co-ordinates, as another alternative way of specifying the location.
DATUM
The map datum, either WGS84, NAD83 (which is the same as WGS84) or NAD27. If not specified, WGS84 is assumed.
SYM or SYMBOL
The code for symbol to use for the waypoint, if it is merged into the app's built-in waypoints.

These file can be transferred into Topo Maps using any of the normal methods for waypoint files, i.e. by downloading from a web site or by sending it from your computer's web browser. (If Topo Maps is not offered as an "Open In" option for a .csv file, try zipping it.)

It is also possible to export CSV files out of the app.

Once loaded the file can be viewed like any other waypoint file: 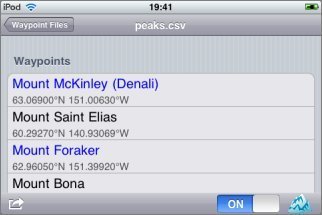 If you turn on display and choose a symbol at the bottom right of the file's screen, the waypoints will also be shown on the maps: 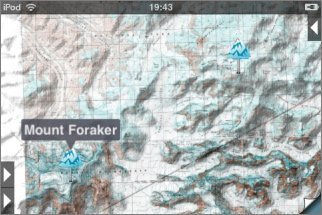 They will also appear in the search results.

Do please let us know if you have difficulty importing CSV files.